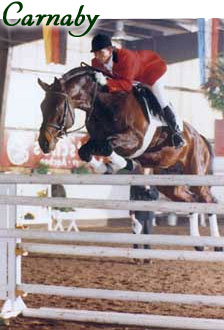 
Carnaby's 3 year old son Carabas (Carnaby/Roberto) won the 2000 Holsteiner Stallion Championship in Neumunster, Germany. Then went on to win Stallion Performance Test at Wavendorf over all breeds in March 2001. His test scores will be listed here shortly.

His sire CARIBO, was sired by the exceptional stallion, CALYPSO II, ridden by Dr. M. Ruping in the G.P. Jumper circuit. CALYPSO II sired many brood mares and stallions, among which, CONTENDER, CARIOLAN, CARIBO and CLASSIKER. CALYPSO II was a foundation stallion and sired many brood mares and 31 approved sons. His dam, TABELLE, is full sister of the renowned dressage horse, GRANAT, ridden by Ch. Stückelberger. CARIBO's brother, CAROSSA, won many international G.P., several Puissance competitions, 2 Nations Cups and was twice winner of the Westfalian Championships in 1986 and 1987, ridden by Peter Nagel Tornau. CARNABY's dam, SEDAN by LORD (a great breeding stallion) is from the Holstein dam-line #6893. CARNABY's dam, SEDAN also produced the sporting stallion CANALETTO (who already won elementary show jumper classes at the age of 4) and the state premium mare CARINA, who was the best 3-year-old mare at mare registration show in Aachen and achieved a good placing at the mare performance test in 1990. SEDAN's granddam FAUPHIN (registered with the FN as "WONNE") was German Junior Rider Competition in Heidelberg in 1980 under her breeder's daughter A. Peters and in one season alone she won and was placed in medium and advanced showjumping competitions over 50 times. In 1982 WONNE and 4 other daughters of the foundation mare NAGINA (by Heidelfreund II) were successfully competing in advanced showjumping competitions - which is a sensational breeding record of a broodmare: Wonne 17 DM 3,860, Wacholder 21 DM 7,530, Wega 34 DM 9,755 (4th in the German Showjumping Derby under W. Peters in 1984), Katene DM 1,530 and Saskia DM 4,310. Another special feature of CARNABY's pedigree is the double existence of the WAHNFRIED bloodline (dam-sire of CARIBO and sire of FAUPHIN), who was linebred for showjumping and sired a lot of top-class showjumpers. WONNE won the German Junior Championships and more than 50M- and S-classes 1,45m-1,50m in one season, ridden by O. Peter's daughter. In 1985 SEDAN produced CARINA, a successful G.P. jumper out of CANTUS. SEDAN was best mare at the mare inspection show and she also won the mare Performance test.

CARNABY is endowed with great jumping ability and extraordinary basic gaits. He has been standing at the Pohlsee breeding centre since 1996 and competes in the jumper circuit in M- and S- classes (1,45m - 1,50m). He won the G.P. Puissance in Löbnitz, clearing 2,10m (7 feet). He is sire of first-class horses - handsome and proportionate, noted for their good paces.